Come and check out our newest gear and have a go at the – for riders by riders – contest Game of M.O.F.O. (#GOMO4). Don’t miss on an epic wakeboarders gathering, and for all you guys and gals who will either test the MO4 Wakeboards gear or participate at the #GOMO4, the awesome folks at Cablepark Wakebase Schwarzlsee will fix you up with a 5€ discount for a daily cable park ticket. 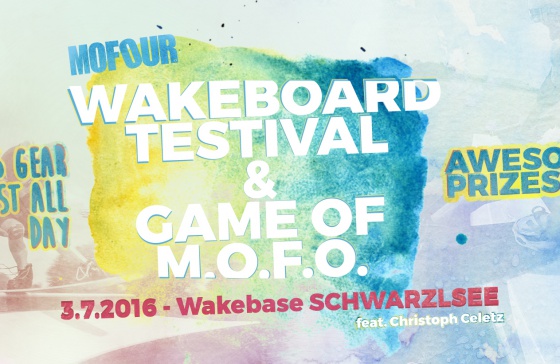 Here are the official #GOMO4 rules:

• Registration at info@mofourwakeboards.com by Saturday – 16.7.
• Max. 16 riders, so you got to be quick to get your place in the game
• €15 Entree fee until 16.7., €20 on the day of the event. Entree fee comes with MO4 goodies (T-shirt, Stickers)
• Normal game of wake rules apply. 1 vs 1 (head to head).
• riders play rock, paper, scissors. winner chooses what obstacle, kicker or area of the cable and what trick.
• if one rider crashes and the other rider lands the trick, then the rider who crashes gets a letter.
• the rider who landed the trick get to choose the next trick and obstacle etc.
• if both riders land then game carries on with the rider who won rock paper scissors chooses another trick.
• if both riders crash then game carries on with the other rider choosing trick.
• rider who is on the last letter gets a second chance to repeat the last trick. if on the second chance the rider lands
the trick then the game carries on.
• First rider to spell out the word, loses and the winner carries on to the next round
• 4 rounds. 1st round, 2nd round, semi ﬁnals, losers ﬁnals/winners ﬁnals.